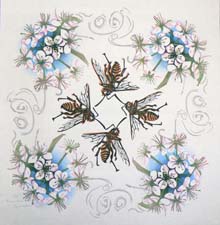 April Vollmer, nationally acclaimed printmaker and expert in modern adaptations of Moku Hanga, traditional Japanese wood block printmaking, will present a lecture and demonstration on Sunday, October 4, 2009, 2:00  3:30 p.m. at the University of New England Art Gallery, 716 Stevens Avenue, Portland. Vollmers appearance in Maine is sponsored by the Kate Mahoney Memorial Fund of Peregrine Press, a cooperative printmaking studio in Portland. The event is open to the public free of charge.

Vollmer printed woodcuts and taught in the U.S. for several years before traveling to Japan to participate in the Nagasawa Art Park program. Working with Japanese printmakers deepened her understanding of the medium of Moku Hanga and its place in Japanese culture. In her teaching she respects the tradition while making the technique accessible to contemporary artists. She has taught workshops at the Japan Society, the Lower East Side Printshop, Pyramid Atlantic, Dieu Donne Papermill, Druckstelle Workshop in Berlin, and many other locations. Her work has been published in journals including Science and Printmaking Today, and her prints are exhibited internationally. 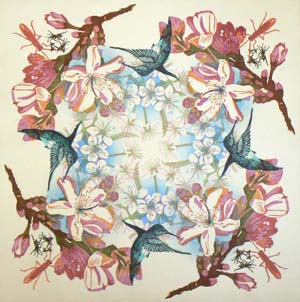 Focusing primarily on Japanese woodcut, Vollmer also works on the computer, combining traditional and contemporary techniques. She uses images from nature like flowers, insects or fish to create repeating patterns that often take the form of mandelas. She works out these complex interwoven patterns on the computer, and then transfers the patterns to wood blocks to cut out and print with traditional Japanese water-base paints. At her lecture, the public will see examples of Vollmers wood block prints, as well as a demonstration of the tools she uses in her work.

Currently on display at the University of New England Gallery of Art are prints from the Portfolio Project by Peregrine Press artists. Member artists were invited to contribute an original print to the inaugural portfolio project, titled "First Impressions," which was first exhibited at the Saco Museum in 2008, and is now in the collections of the University of New England, Portland Museum of Art, the Farnsworth Art Museum, Bowdoin College Museum, Colby College Museum, and the New York Public Library. Each artist submitted an 11 x 15 inch work, printed in an edition of ten on various papers, using different kinds of printmaking techniques. The UNE Gallery is also showing other examples of prints by Peregrine Press Artists.

The Kate Mahoney Memorial Fund, sponsor of April Vollmers lecture, was established in 2003 in memory of a founding member of Peregrine Press. The Fund is designed to encourage printmakers in southern Maine and to promote public understanding of the art of printmaking. Established in 1991, Peregrine Press has provided many printmakers with an affordable and accessible way to continue their practice of printmaking. The well-equipped studio at the Bakery Building in Portland is run cooperatively by its 30 members, who use a wide variety of printmaking methods, including woodcut, collograph, monotype, and etching.

On Friday, May 19th, 2006 at 7pm, Peregrine Press hosted a lecture and slide presentation called, Connecting Through Time: Carving, Printing, Tools, Paper and InkSacred Order of the HAND by Boston artist, Annie Silverman. The lecture was held at SPACE Gallery, 538 Congress Street, in Portland. Silverman, an established printmaker, book artist, and writer spoke about her exploration of woodcuts, story telling, and her methods of creating unique impressions and patterned surfaces. Silverman is a studio artist and skilled teacher who has been working with experimental relief printmaking for the past 19 years. One of her woodcut prints was chosen in 2005 as a purchase prize for the PARKSIDE SHOW at the University of Wisconsin, Kenosha. She is a member of Boston Printmakers. Her prints and unique books have been exhibited and collected nationally and internationally, most recently in Havana, Cuba, Johannesburg, South Africa and Yokohama, Japan. 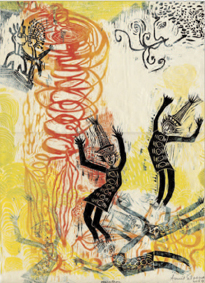 Silverman has been affiliated with Massachusetts College of Art in Boston for over 15 years where she teaches Relief Printmaking and Artists Books. She has also taught at Penland School of Crafts in North Carolina, Art New England at Bennington College in Vermont, Pyramid Atlantic in Maryland, Mixit Studios in Somerville, MA and the South Shore Arts Center in Cohasset, MA.

My current work is in the exploration of the woodcut, a printmaking process that is both elemental, ancient, and expresses my love of mark making into surfaces.

The Kate Mahoney Memorial Fund, sponsor of this lecture was established in 2003 to benefit the work of Peregrine Press. Kate Mahoney, who passed away in the spring of 2003, was a founding member of Peregrine Press. Created with the generous support of her friends, family, and husband, Bill Curtsinger, the fund has grown into a vehicle for encouraging printmaking in southern Maine. In addition to the lecture, and a workshop for members the following day, a scholarship has been established in both Kate Mahoney and Marcia Carners memory, to offer a free year of membership to a graduating printmaking major from the University of Southern Maine or Maine College of Art. Through these, and other activities, we celebrate Kates long commitment to Peregrine Press, and her love of printmaking. 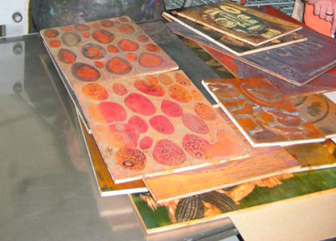 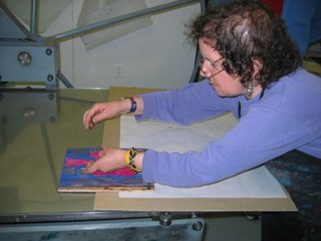 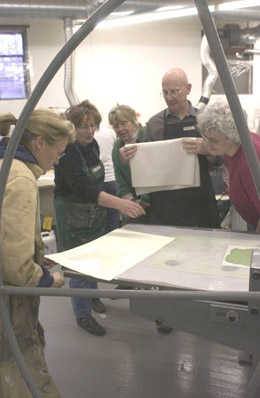 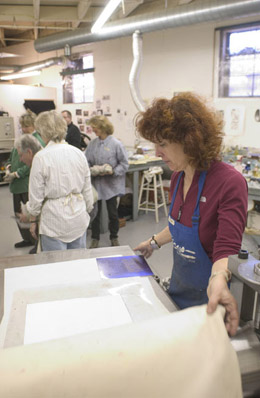 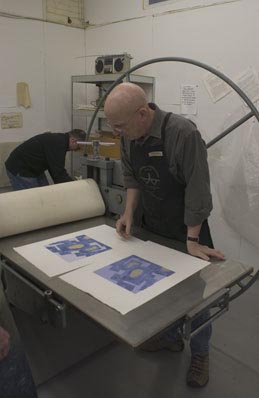 From left to right in the left photo are Sooze Large, Jeanne Hayman, Lou Lipkin, Peter Scott and Mary Brennan;
in the middle photo: Judy Allen; and the right photo is Peter Scott. 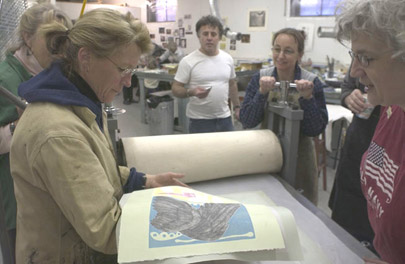 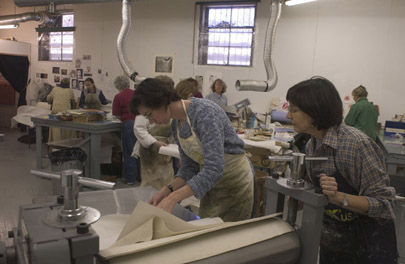 On the left: press member Soozie Large critiques her print with Rich Entel, Kit Pike and Mary Brennan;
on the right: Mary Hart pulling prints during KMMF Workshop 4/9/05 as Sandy Quinn looks on.